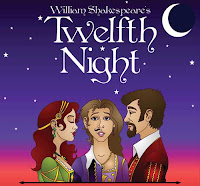 William Shakespeare’s Twelfth Night was first performed over 400 years ago on Candlemas night, 2 February 1602, in England. Some of the greatest names in 20th century English and American theatre have since performed in the play – Sir Ralph Richardson, Sir John Gielgud, Sir Laurence Olivier, Vivien Leigh, and Helen Hayes, to name a few.

Twelfth Night, one of the Bard’s most accomplished comedies, is currently being performed on the stage of the Performing Arts Center at Anoka-Ramsey Commmunity College in Coon Rapids.

I was delighted to attend opening night on April 16th. Scott Ford’s inspired direction, the stark yet effective scenic design, and the striking costuming made for a memorable evening.

The young actors, by and large, did a commendable job of interpreting Shakespeare’s intricate and complex prose. A few struggled, others should remember that they must react to action and other actors on the stage, but Marcus Coker (Sir Toby Belch), Jacob Budnick (Sir Andrew Aguecheek), and Emily Moulds (Feste) gave diverting and entertaining performances in their comic roles. Neal Skoy was outstanding as Malvolio.

Mr. Skoy is a remarkably talented young man, and the audience was captivated by his exceptional performance from the moment he first appeared on stage. Malvolio is a complex and fascinating character that he handled with assurance and aplomb, especially through the use of his rich and eloquent voice – which filled every corner of the auditorium, seemingly without effort.

The actors cavorted about the stage in some of the most intriguing, if not startling, costumes I’ve ever seen in a Shakespeare production. Special kudos to Costume Designer Barb Portinga for combining vintage evening gowns, fright wigs, and red high-top sneakers with more conventional ensembles recalling the 16th century. Lauren Haven was lovely in everything she wore, Mr. Skoy bore a striking resemblance to the young F. Scott Fitzgerald in many of his scenes, and Mr. Budnick looked like an escapee from the Court of Versailles throughout. It was all very strange, but it worked.