Presentation: Minnesota in the Vietnam War, by Arn Kind. 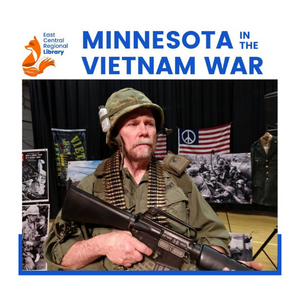 Who were the Vietnamese and what was their fight all about? How did the U.S. get involved in the war? If you’re interested in the history of the Vietnam War and how Minnesota was involved, we’ve got just the program for you! Experience a unique way of learning about this fascinating, yet controversial, period in […]

If you put the word Storytelling and the word Origami together, you get Storigami. Join us for a fun fill Zoom meeting where we will use our imaginations as paper artist, Kathleen Sheridan, folds paper and shapes become a story. The second time the story is told, we’ll ask you to provide the supply kit […]

Instead of Storytime this Wednesday we’re going to have a FAMILY CONCERT WITH THE JOLLY POPS!!! We had to Pops out to all of our libraries last summer and are excited to welcome them back again. As we can’t gather together as a large group we’re going to have our concert via Facebook Live. On […]

60th Anniversary and Lucie B. Amundsen

Author Visit: Lucie B. Amundsen Monday, Oct. 7, 6:30pm – Pine City Public Library Lucie Amundsen is a writer, marketer, and reluctant farmer who co-owns Locally Laid Egg Company, a Minnesota farm that aims to change the way eggs are produced in America. In her book, Locally Laid, which earned her a 2016 Midwest Booksellers […]

60 Years in the Books

Workshop will show kids how to decorate Ojibwe-style shoulder bags

So far, kids have enjoyed creating their very own dream catchers and corn husk dolls. Now it’s time to decorate Ojibwe-style shoulder bags that can be taken home in the last of a series of workshops instructed by the Mille Lacs Indian Musuem and Trading Post. For ages 6 and up, the program will run […]

Join the Mille Lacs Indian Museum and Trading Post for a kids craft workshop! Participants will learn how to make a corn husk doll to take home. Corn husk dolls are an American Indian toy, made from the outer covering of an ear of corn and typically made during the fall. Register yourself online, from wherever […]

His Irish tunes are smiling on Irish tradition

If you’re into romance novels, British accents, Jane Eyre, or anything by Jane Austen, there’s a good chance you’ll become big fans of Minnesota author Julie Klassen. The public is invited to a special visit by this bestselling author at 6:30 p.m. Tuesday, March 6 at the Hinckley Public Library. Klassen is known for her […]